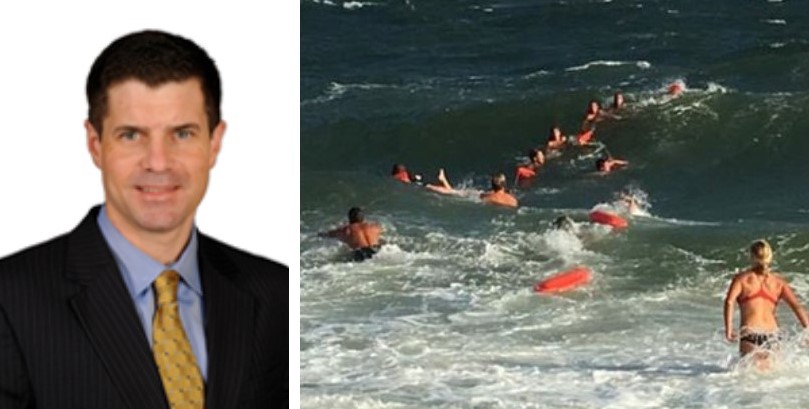 Newtown Square's Pete Peterson was saved from drowning in a dramatic rescue in Cape May. Right image via Troy Perkins, U.S. Coast Guard.

Newtown Square resident Pete Peterson was saved from drowning by a human chain during a dramatic rescue in Cape May, writes William Bender for the Philadelphia Inquirer.

The vice president at Bellevue Communications Group in Philadelphia and a veteran political operative for the Delaware County Republican Party ran into the ocean with his two sisters last Friday to help another relative who had gotten swept out.

“I ran in seconds later, but from farther down the beach, unfortunately into the center of the rip tide.”

Peterson and his sisters found themselves pulled toward a jetty, with a large wave sending the women toward shore. But Peterson was caught on the rip current’s other side.

“One of the things they say about a rip current is, you want to swim horizontal to the beach to get out of it,” he said. “I did that, but I wasn’t getting out of it. It was still pulling me out.

“My sisters saved our family member and deserve to be recognized as the heroes they are.”

One of Peterson’s first rescuers was Joshua Vandermark, a Cape May firefighter, who said rescuers used the riptide to their advantage to quickly get to him.

Once they reached Peterson, they wrapped a buoy around him to make sure he remained afloat, and then waited for the human chain to form to bring him in to shore.

“It was a herculean effort,” said Peterson. “Probably 25 or 30 people forming a chain. It was just incredible.”

Read more about the rescue of Pete Peterson in the Philadelphia Inquirer by clicking here.