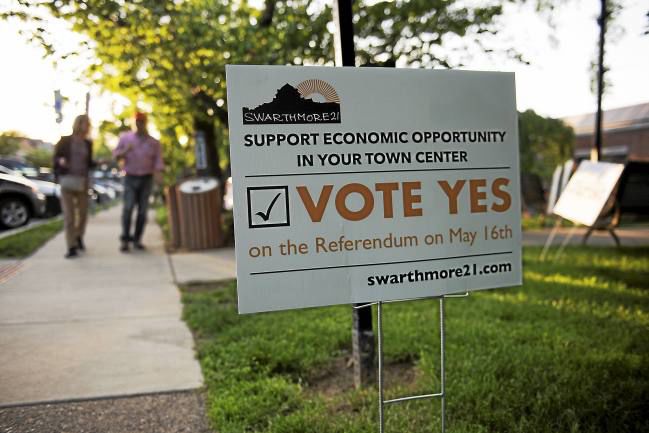 After decades of unsuccessful attempts, voters in dry Swarthmore toasted to the overwhelming approval of the borough’s first liquor licenses. Image via Delaware County News Network.

A desire that has been fermenting in Swarthmore for more than 65 years was guzzled up by voters on May 16, when they approved a referendum allowing the dry borough to sell liquor licenses.

Despite several failed efforts in the past, the measure succeeded by a vote of 1,335 to 310, according to a Delaware County News Network report by Kathleen Carey.

The referendum uncorks an initial two liquor licenses, with the potential for more as determined by the discretion of the borough council and state Liquor Control Board. Licensees are required to operate in at least 300 square feet with 30 or more seats.

“This is just the beginning and only one baby step in the process. We have removed an important obstacle, but there are others,” said Swarthmore21 spokespersons Pat Francher and Vince Barrett. “As we have said, this is not a silver bullet, nor will it have an impact overnight. Regardless, we’re confident Swarthmore will continue to be the unique and special place that it is to our residents and look forward to continued engagement with the community along this journey.”

Swarthmore21 lobbied for passage as a means for increased local economic development. The liquor issue has come before voters in 1949, 2001, and 2011.