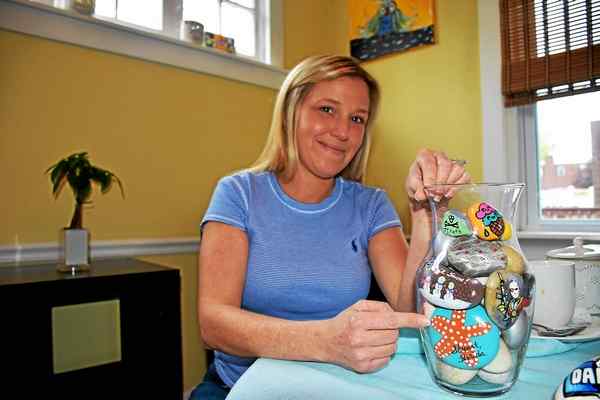 The brainchild of Jamie Sottnick, the simple act of painting and hiding rocks has spread joy from Havertown all across the Delaware Valley for those who find them. Image via Anne Neborak, Digital First Media.

People are stumbling across surprising inspiration all across the Delaware Valley, and it started with a single rock.

Havertown’s Jamie Sottnick has started a landslide of kindness simply by painting rocks.

“It has become so big. Such a simple idea has brought so many people together,” she said in a Daily Times report by Anne Neborak.

What started as the Havertown Rock Group soon expanded to Upper Darby, Springfield, and other parts of Delaware County, and now it crosses state lines as Delaware Valley Rocks.

“I believe it is helping depression and inspiring people,” Sottnick said. “I have several mothers who are either single mothers or just been depressed and have said, ‘You have no idea what this has done for me in such a positive way.’ Constantly, my private messenger has this type of message.”

More than 11,000 followers have joined in on Facebook, sharing the specially painted rocks they’ve found or created. And the paint on the rocks varies with the causes close to their hearts: Mental Health Awareness Month, Support Our Troops, Autism Awareness.

Read more about the inspirational rocks in the Daily Times here.