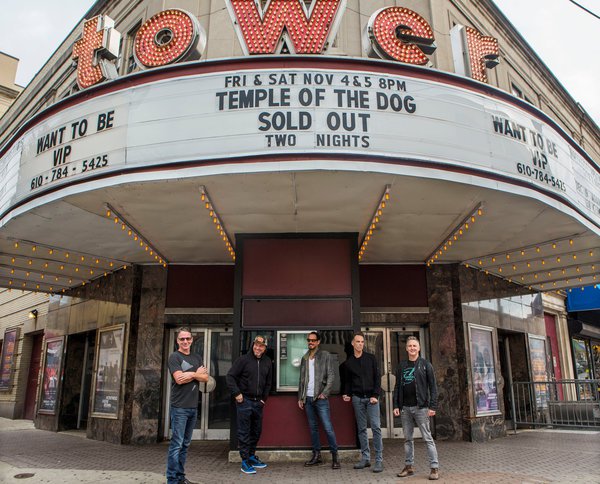 The unofficial band behind an impromptu album made in memory of a friend some 25 years ago was resurrected at the Tower Theater in Upper Darby last weekend.

Showcasing the combined talents of Soundgarden’s Chris Cornell and Pearl Jam’s Stone Gossard, Mike McCready, Matt Cameron, and Jeff Ament, the Tower Theater brought together the five members of Temple of the Dog to elevate a tribute that has taken on a life of its own, according to a report in The New York Times by Mike Rubin.

In anticipation of last weekend’s performances, the band “that doesn’t exist” sold out its eight-show, five-city mini-tour in mere minutes.

The tribute effort originally centered on the memory of Andrew Wood, Seattle-based lead singer of Malfunkshun and Mother Love Bone who died from a heroin overdose in 1990, and it drew its name from one of Wood’s lyrics in “Man of Golden Words.”

Cornell’s two songs in response to the tragedy quickly evolved into an entire album once Ament and Gossard joined in.

“He wasn’t a footnote in our history,” Cameron said of Wood. “He was a real big influence for us all.”

The album went from modest success to platinum after MTV put it in the spotlight in 1992, but the band members had already gone their separate ways. They never went on tour. Until now.

Read more about the full reincarnation of Temple of the Dog at Tower Theater in The New York Times here.